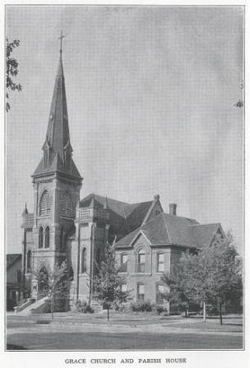 The first pastor, S. C. Franzen, arrived to serve Grace and Belgrade in December of 1889. With a membership of 100 parishioners, a lot of land on the corner of Fourth and Main was purchased for $800, and a church was built for $15,000 with doors facing Main Street. When Rev. O.J. Arthur arrived, he gave 4 services each Sunday – one in Judson, one in Belgrade, and two at Grace.

The Ladies Aid was founded July 7, 1887 and held in ladies’ homes. On May 31, 1888 the ladies were organized into units. In 1958, the Ladies Aid became the Grace Lutheran Church Women, when the Augustana Synod made a move to consolidate the ladies’ groups. During the 1987 merging of three Lutheran church bodies, the groups were formed again under the new Women of the ELCA (WELCA).

Our present church, with main entrance doors facing Fourth Street, was designed by Wick, Stansfield and Kagermeier and built by the Robert Carlson Construction Company between 1965 and 1967. Our ‘Grace’ mosaic, which faces Fourth Street, was first designed as a mural by Dr. Donald Gregory (Professor - Art, Gustavus Adolphus College), now on view in our narthex, and then created as a mosaic by the Scuola Mosaicisti del Friuli (Fruili School of Mosaic) in Splimbergo, Italy. When the work reached Mankato, the mosaic was installed by the Mankato Tile and Terrazzo Company.

A talented musician and congregation member was Elias J. Halling, who was on the faculty of Mankato State University, and joined our church in 1937. He was instrumental in the purchase of the Moller organ, rather than an electronic organ that some members preferred. That organ, in its third revision, has been enlarged so that as of 2013 it has 41 ranks with a total of 2411 pipes, making it one of the most impressive organs in the southern part of the state. This instrument is truly an asset to worship services and numerous events. Mr. Halling was our Voices of Grace choir director for over 37 years when he retired. His patience and determination in choral direction produced some of the finest choirs at the college and at Grace. He was honored by Mankato State by the naming of the recital hall in the Performing Arts Centerthe E.J. Halling Recital Hall.

Our current Pastor, the Rev John Odegard, was called in August of 2019.